Top Honors!  The Minnesota State VFW gave the Best Post Website Award to BrainerdVFW.org in 2020 and 2021.  That's two years in a row!  Of the 208 VFW posts in the state, at least ten have professionally written websites. BrainerdVFW.org is a volunteer effort. 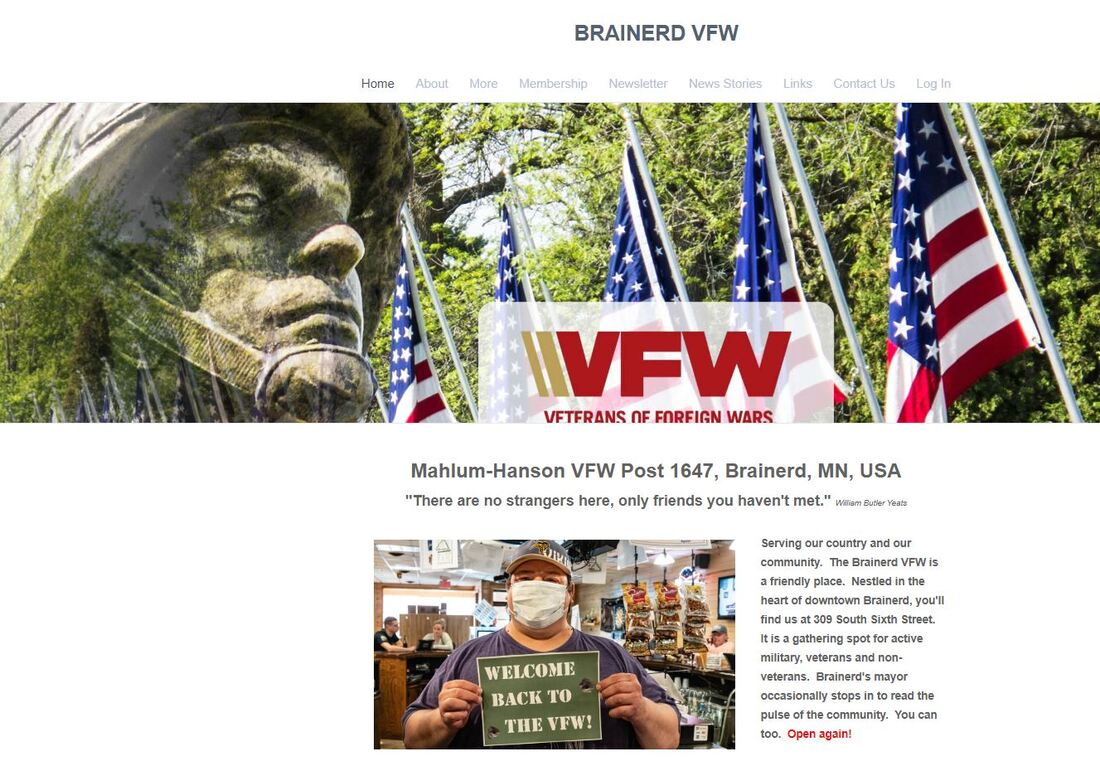 Also in 2020, the Brainerd VFW received the State VFW award for the Best Post News Article
Brainerd VFW finds itself in a battle with time, social changes
​Reprint from the Brainerd Dispatch newspaper, November 25, 2019, written by: Gabriel D. Lagarde 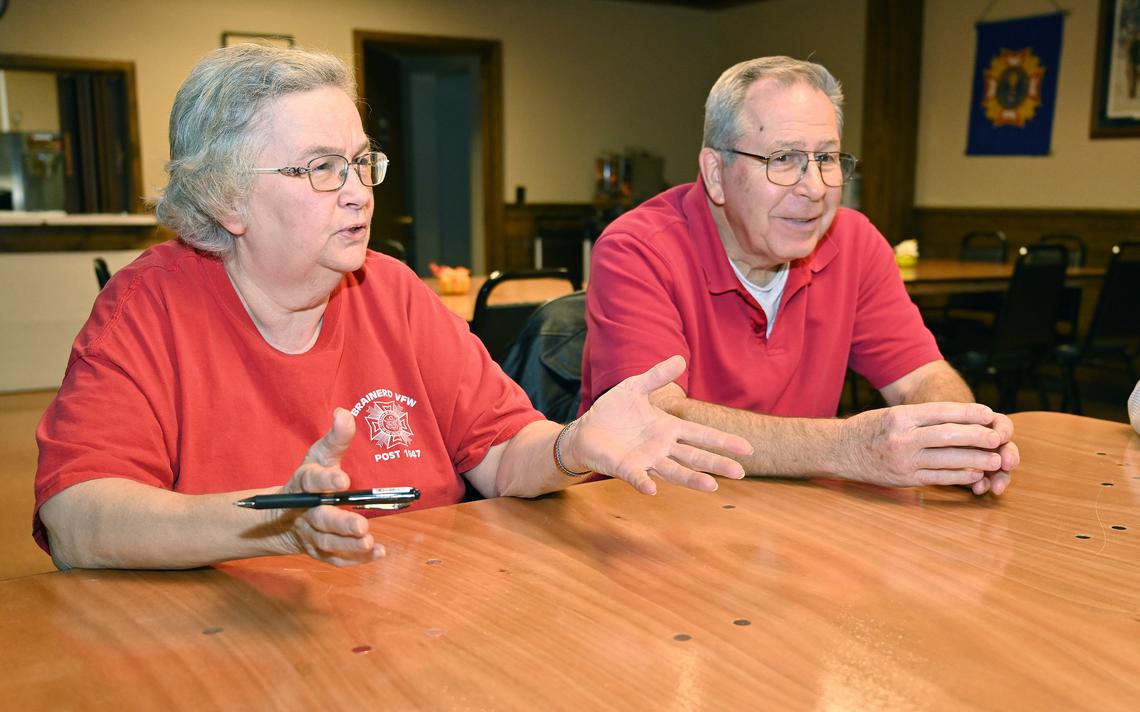 Brainerd VFW finds itself in a battle with time, social changes.  Membership at the veteran-centric club has been halved since the mid-1990s for a number of factors. Outside veteran affairs, VFW Post 1647 in Brainerd is a nonprofit organization that serves needy veterans, their families and the community with over $70,000 in charitable contributions each year. With shrinking numbers of active members, the organization notes it needs younger people to join, but that has proved challenging.

Gathered around a table at their headquarters on South Sixth Street, a group of veterans spoke on the current state of affairs for the local Veterans of Foreign Wars Post 1647 — a conversation that had the feel of aging warriors preparing for a change in the guard that might never come.

Located in downtown Brainerd at 309 S. Sixth St., VFW Post 1647 finds itself at a crossroads — much like the rest of the VFW organization as a whole — that may be unprecedented since its inception as one of the first VFW chapters in Minnesota. Much like similar legacy volunteer organizations like the Eagles, the League of Women Voters or local churches, the VFW has been experiencing a significant decline in membership, and the majority of its current members are older than 65.

“It’s hard to get people in,” said Jan Lambert, an auxiliary member and mother of a veteran. “We need to get the young people involved because we’re all getting older. I’d be fine making it to a thousand, but I’m not going to live that far. Our problem is how do we go about getting them to come back, to get people to join.”

“Young people don’t join things,” said Dave Meyer, the senior vice commander at 1647. “They’re more independent. They’re more leery. They always ask: ‘What do you want of me?’ Well, not everybody wants something of you, they just want to help. The social, the camaraderie-ship, that’s a big part of most clubs.”

For comparison, the VFW once enjoined a membership of 711 members in 1996, while current post membership sits at 352. The auxiliary — more of a supporting role, made up by immediate family members and close relatives of veterans — currently stands at 383. Furthermore, the “core” group of most active volunteers is no larger than 30, and it’s shrinking every year.

There are a number of reasons for this. Underlying everything is a general societal shift from community activities and volunteer clubs, Meyer said, to one that’s more isolated, individual-centric and preoccupied with personal daily affairs.
Coupled with that trend is the fact that each successive war has notably produced fewer veterans who fit the organization’s criteria. Increasingly overtaxed families don’t have as much time for a larger list of volunteer organizations. And, if they do, people may take part in advocacy groups which are non-local, national or even international in scope, compared to the VFW office just down the road.
While VFW Post 1647 is making a push to revamp its image as a kind of old-fashioned club atmosphere centered around the bar, Meyer said, it’s been tough sledding to get disillusioned older veterans or younger veterans to sign up for the idea.

Loss of trust?  At multiple points of the discussion, members of VFW Post 1647 noted the social landscape is a far cry from the one World War II vets returned to when they signed up in the late 1940s and early 1950s.
Few things exemplify this than how veterans were received in the wake of World War II compared to their sons and daughters after Vietnam — which is to say, Meyer noted, that World War II veterans returned to confetti parades and public adoration.
Vietnam vets? As participants in a deeply controversial conflict, they were often rejected, he said, harassed as baby killers and traitors, despite the fact they themselves didn’t make the decision to invade the south Asian country and they didn’t volunteer, but were drafted.
So, in turn, the notion of joining what was often billed as a patriotic good ol’ boy’s club didn’t sit well with a lot of Vietnam veterans (as well as Korean War veterans, participants in the “forgotten war”), Meyer said. Many Vietnam veterans, despite being eligible and needing VFW service, still refuse to associate themselves with the organization as a result.
“That’s the biggest thing,” Meyer said. “So many Vietnam veterans don’t want anything to do with the VFW. They think it’s government, like (the Department of Veteran’s Affairs).”

Decades passed. The United States has been extraordinarily active in world conflicts, but between the end of Vietnam in 1975 and the beginning of 2001, most were specialized operations, conflicts that were wrapped up in a matter of months at most. While the contributions of these veterans is just as valuable, Chaplain Mark Persons said, it means there are much fewer eligible veterans.
“World War II, everyone was involved,” Meyer said. “Vietnam, Korea, it was thousands upon thousands. Desert Storm and the War on Terror?  It’s the same troops going over and over. It’s less than 1%. The pool to draw from is so much smaller. People aren’t joining.”
Even the war on terror, which began in Afghanistan, spread into Iraq and now finds itself active in more than seven nations across the Middle East and Africa — even this is largely a hidden conflict to the larger community, Meyer said. It’s relevant to only a tiny fraction of the United States population that’s continually sent back on multiple tours and comprised largely of U.S. Army National Guard members. Modern warfare, he noted, is for only a choice few.
It’s during an age of skepticism and distrust in historical issues, Meyer said, which has driven many younger people away. That may mean that the VFW is looking at tough times ahead.

Leaving a mark.  Above all else, the VFW is an organization that promotes the welfare and interests of veterans, Meyer said.
“The whole focus is veterans for veterans,” Meyer said. “Nobody does it for veterans like the VFW. The younger ones, it’s hard to convince them. There’s a lot of good benefits for veterans now, but the government didn't just give them away. It was a lot of lobbying, a lot of activism from big numbers. If the government can give it away whenever they want, they can take it away whenever they want. That’s the biggest problem.”

For a subgroup of the population that is particularly vulnerable to mental illness, substance abuse and suicide as a result of their trauma, veterans can need an organization like the VFW that can provide the community, brotherhood and services for veterans in a tough place.
“Sometimes it’s just to have some kind of family,” Lambert said. “It’s about walking into a place of like-minded people and have them ask you how your week went.”  “It’s my opinion that we reduce suicides,” Persons said. “Because it’s veterans helping veterans. We help each other. When we do that, the chances of suicide are far less.” 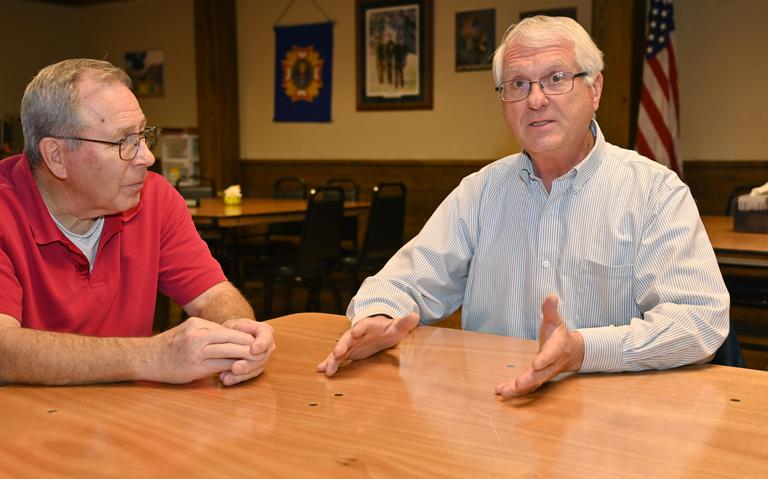 In addition, the post is active in the community. Perhaps the most vivid example of this is the color guard — which is often the most visible contribution and, as VFW members noted, most emblematic of the patriotic core that binds the community together for a common cause. The color guard is a joint effort of the VFW, Brainerd American Legion and the Crow Wing County Disabled Veterans.
Outside veteran affairs, Post 1647 is a nonprofit organization that serves needy veterans, their families and the community with over $70,000 in charitable contributions each year. The chapter sponsors two VFW baseball teams, a Bantam AA hockey team, the Brainerd High School trap shooting team, the Brainerd Warrior robotics club, takes part in the Brainerd July Fourth Parade, the American Cancer Society, Parker Scout Camp, the Initiative Foundation, Special Olympics Minnesota, Pillager Schools Fishing Club, as well as other public initiatives, donations and education scholarships.

GABRIEL LAGARDE may be reached at gabe.lagarde@brainerddispatch.com or 218-855-5859. Follow at www.twitter.com/glbrddispatch.