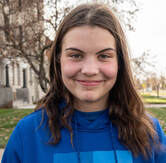 What is Patriotism to Me?  by 8th grader Elizabeth Sarvie of Brainerd, MN.

Patriotism to me means so many things. Patriotism is so important, and it is what makes up this country. If nobody showed patriotism, the country would fall apart. This is what patriotism really means to me...

Patriotism means you love and honor your country so much that you are willing to sacrifice things for it. Patriotism means that you love your country so much that if you were called to go and defend your country in war, you would be willing to do it. It is thanking and honoring our veterans for all they have done for us. They have made a huge sacrifice for us and they do it all out of love for this country. They are willing to die because they love this country so much. That is as patriotic as you can get. Patriotism also means honoring your flag. It is flying the flag proudly and respectfully. This includes standing for the flag and the National Anthem and learning the Pledge of Allegiance and saying it. Patriotism is respecting your country's leaders no matter who they are; democratic, republican, or anybody else. Taking pride in your country's leaders is part of patriotism. Voting is also showing patriotism. The 19th Amendment grants us the right to vote. By doing this, we show support for our country and are doing what our founders wanted us to do. Patriotism means being proud to live in our country and not wanting to live anywhere else. Be proud to live in the U.S.! We are free to do what we want. Patriotism is respecting the rights and freedoms of others. We all deserve to be treated equal and with respect. By doing this, we are showing love for the country, by respecting the law. Finally, patriotism is helping out other people in our country in times of need, such as after a hurricane or other natural disaster. It is giving up our time and money for our country and the people that live in it. When we donate time or money, we are sacrificing something that we normally would not share. That shows love for our country.

There are many ways to show patriotism.  Respect the flag.  Honor veterans.  Take pride in our country.  Help people out in times of need.  All this is what patriotism means to me.
Third place 2020-2021 Patriot Pen writing competition winner at the Brainerd VFW. 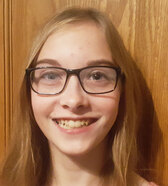 What is Patriotism to Me?  by 7th grader Margaret Ringhand of Ironton, MN.

There are a lot of things that patriotism means to me. It means raising the flag in the morning at school. It means standing up and singing the National Anthem at football games. It even means saying the Pledge of Allegiance in the morning. But most importantly, it means showing respect and pride in our country. That is what makes our country so strong. Let me explain what patriotism means to me.

Raising the flag at school in the morning and taking it down at the end of the day is important because it shows the respect that all of our schools have for the country. The fact that real veterans come to our school and teach us how to fold the flag to show the most respect is a sign in itself. They care enough to make sure the flag is respected and honored. Veterans should be respected because of all that they have done for our country. Even if they weren’t on the front lines fighting, they were doing important work to help our country remain strong and flourishing.

Saying the Pledge of Allegiance in the morning is another important sign of Patriotism. We are saying that we promise allegiance to the Flag, which represents our country. We say, “one nation under God” which shows how much our faith matters to us. “With Liberty and Justice for all” shows that we want to be fair and just and to give everybody a chance to be just and show justice to others. Even the name of our country is a sign of unity. The United States of America says that we are united together in one nation. The stars and stripes represent the 50 states and the 13 original colonies. ​

Patriotism means many things to me. I have mentioned some and I hope that you agree with them. Our country is strong, and is becoming all the stronger because of the Patriotism we show to others. If we show pride in our country we will flourish and grow stronger. This is what Patriotism means to me.
Click here to return to the Patriot's Pen main page and the first place winner