Download File
All entries must be received by 10 pm on October 31, 2020.  The preferred audio file type is mp3.   Email to teki@mwpersons.com or send a thumb drive to the Brainerd VFW, 309 South 6th Street, Brainerd, MN 56401.  Inquiries to Mark Persons teki@mwpersons.com
2019-2020 Voice of Democracy Competition 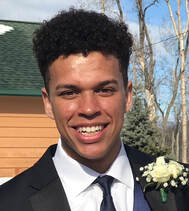 Johnathan Berry, a 12th grade student at Brainerd High School, was the first place winner.  He received a check for $300 and a certificate of accomplishment from the Brainerd VFW.  Johnathan's entry also took third place in Minnesota VFW 6th District competition.  His script and audio are below:

For weeks I pondered the question “What Makes America Great?”, The question asked here can be interpreted in so many ways and the vast amount of answers that can be presented is never ending, but I continued to funnel it through over and over again in my head, revisiting the question over and over again and the thing I began to realize is the easiest thing we begin to do as a society is neglect the many blessings our glorious country provides us with and how we continually take each and every one of those blessings for granted, believing we have nothing in life, but in reality the situation presented to us as citizens of the United States is great. As part of the youth of America, I find it especially important that we are granted a voice in justice and social issues and can stand up to make a drastic change in the nation which is given to us through our very first right in the Constitutional amendments. The government we have that functions through democracy allows us many rights that can be overlooked as well such as our amendments, our right to vote, the ability to voice our demands as a population, all these things allowed by our democracy-based government. I believe though that the 27 amendments that are given to us as citizens are the greatest things to ever come about in America because not only do they tackle many social issues and discriminative issues we have had in our nation’s history, but it provides us with many freedoms that can be prohibited in many other countries such as women’s rights, freedom of speech, freedom of religion, and that is to just name a few. Not only has America in itself provided me with a voice to speak my concerns on social and unconstitutional issues it has provided me with basic benefits that make my life safer, easier, and better such as public education, healthcare, and even simple everyday household things such as heating, running water, and electricity. All things that seem so frequent and easily accessible that I sometimes don’t even realize that there are people in this world that live with none of these things and it can truly make a person count their blessings. America is also made great through the amount of opportunities it provides people to form their own successful ideas and businesses and allows peoples dreams to actually become reality. The possibilities of business opportunities are endless and with the amount of free advertising you can generate on your own through social media, it has never been possible in any other generation of people, it opens a whole new door for entrepreneurs in America to create and expand for their business. Seeing a wide variety of business possibilities not only makes the dream of success a possibility, it also makes it extremely easy. Basically what this question boils down to would be “What doesn’t make America great?” because when we have so many positives in our country and all of this greatness we should be looking at the bigger picture and asking ourselves, “Okay, what can we do next to improve our country?” and I think that is the best thing we can do for not only ourselves, but America as well.
Johnathan went on to win third place in the Minnesota Sixth District competition.  He received an award and $100.
Keenan Hodge of Baxter, a 12th grader at Brainerd Senior High, is the second place winner this year.  Received a $200 check and a certificate.  Congratulations to both.
Elizabeth Link of Inver Grove Heights, MN, was named the 2019-2020 Minnesota VFW Voice of Democracy winner.  Elizabeth is a good speaker and should do well in life.
2019-2020 National youth scholarship winners
2018-2019 VFW Voice of Democracy National Winner
2017-2018 VFW Voice of Democracy National Winner
2016-2017 VFW Voice of Democracy National Winner
2015-2016 VFW Voice of Democracy National Winner
5th graders participate in the Essay Competition
Students in grades 6 - 8 competed in the Patriot's Pen competition
​Scouts K-12 compete for Scout of the Year