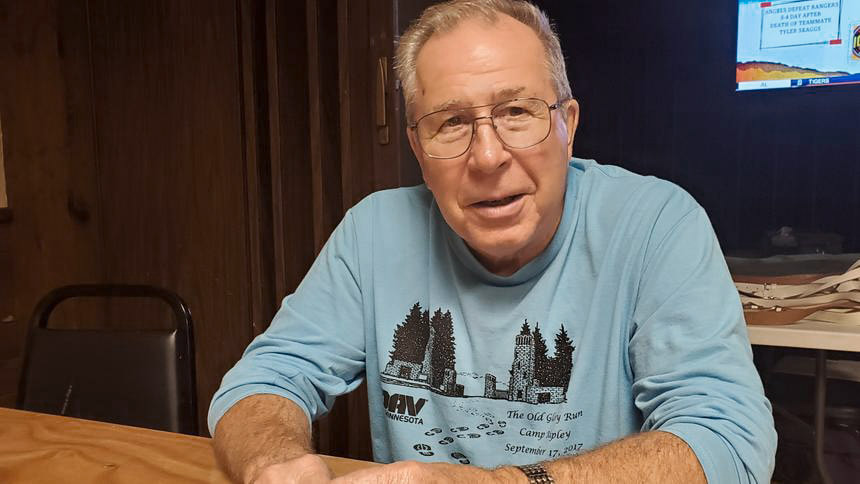 Dave Meyer was honored as Brainerd's first Community Member of the Month for his volunteer work with several area veteran organizations, along with Special Olympics and Junior Achievement. Theresa Bourke / Brainerd Dispatch
With thousands of volunteer hours logged with local veterans organizations over the last 14 years, Dave Meyer earned himself the title of Brainerd’s first Community Member of the Month.

“I can’t think of a better person to lead this off,” Mayor Ed Menk said as he presented Meyer with a plaque at the Monday, July 1, city council meeting in honor of all Meyer has done for the Brainerd community.  “I met Dave many years ago … and I’ve never seen the man without a smile,” Menk said. “And he never stands still, so I don’t know what you do to keep going, but it’s with great honor that I’m able to present this to you.”

Instigated in May, the Community Member of the Month award serves as a way to acknowledge those who work hard for their fellow residents without necessarily gaining recognition. Residents can nominate any community members for the honor, ultimately giving Menk the final say in each month’s awardee.  Two members of Brainerd’s Veterans of Foreign Wars nominated Meyer for the honor.

Still unsure about his chance to be in the spotlight, the 70-year-old Vietnam War veteran hopes to use the award as a way to bring about awareness for the VFW and Disabled American Veterans, two local organizations he dedicates so much of his time to.

“We here at the VFW, and all the veterans groups, would like to let the public know how much we’re doing, so it’s a way of recognizing what the clubs do in the community. We do contribute a lot, so that makes a big difference if we can get a little notice about that,” he said during an interview July 3 at the VFW, where he spends a lot of his free time.

After retiring early from a more than 30 year long career with UPS at age 56, Meyer joined the Brainerd chapters of the VFW and DAV in 2005 to give back to fellow veterans.  “It keeps me going,” he said of his volunteer endeavors. “As long as I can do it physically, it feels good."

Now clocking more volunteer hours some weeks than he did paid hours with UPS, Meyer spends his time driving veterans to medical appointments in St. Cloud and Minneapolis, leading the VFW’s color guard at veteran funerals and other events, partaking in Veterans Day ceremonies at local schools and organizing Brainerd’s Memorial Day events.

Recently, he received a commemorative pin from the DAV for reaching 8,000 volunteer hours and 100,000 miles driven.  And as if that weren’t enough, Meyer also finds time to coach local Special Olympics teams and help out with the Junior Achievement program at Harrison Elementary School.

There’s always a need for volunteers somewhere, he said, whether it’s with veterans, at a church or through any other local organization.  “Just pick a place and do it,” he said as encouragement for anyone looking to get involved in their community.

Meyer said he has met a lot of great people through his volunteer efforts and has a good core group to work with on his many veteran activities.  He wants to spread the word on what the VFW and DAV do so veterans who have earned their benefits can use them.  “Our goal is to help veterans, that’s the big thing with the DAV,” he said. “With the VFW, it’s more community oriented.”  According to the VFW’s website, the organization’s goal is not only to serve the country and the community, but also to be a friendly gathering spot for active military, veterans and non-veterans.

The DAV is a nonprofit charity providing lifetime support for veterans and their families, including connecting veterans with jobs, driving them to medical appointments and providing other resources.
“Veterans for veterans,” Meyer said, “That’s what we do, try to help veterans.”