Our common bond is serving in war-torn countries 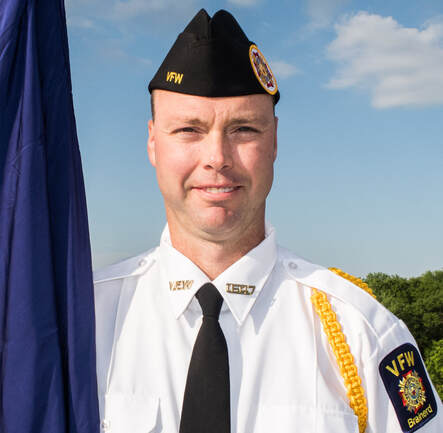 VFW Commander Chip Borle on Color Guard duty
Christian "Chip" Borle - Commander
Born May 14, 1975, he graduated from high school in Abingdon, Illinois, then went to Norwich University military college for 5 years and obtained a Bachelor of Science degree.  Chip joined the U.S. Army in 2000 as a combat engineer (12B) in the 82nd Airborne and was as an E4 specialist when serving in Iraq.  In 2003 he moved to the Minnesota National Guard, in which he is still serving as an E7 staff sergeant.

Chip's story:  I am happy to be a member of the Veterans of Foreign Wars and spend as much time as I can assisting my fellow veterans.  Contact me at 218-851-0855.
Kevin Jensen - Senior Vice Commander
Kevin is a VFW Life Member and Chief Warrant Officer in the Minnesota National Guard with 18 years active duty, including serving in Kuwait, Operations Enduring Freedom and Iraqi Freedom.  Kevin lives in Baxter and is working at Camp Ripley in vehicle maintenance.  Kevin is also seen in the Brainerd Honor Guard/Color Guard at funerals and parades.  He also coordinates Brainerd VFW youth baseball, youth hockey.  ​651-324-0640.
Scott Hall - Junior Vice Commander
Scott is a Life Member of the Brainerd VFW.  He served in the Army Reserve as an administration specialist at battalion level from 1997 to 2005, including a tour in in Afghanistan 2004-2005.  Scott is now the ReStore Manager at the Lakes Area Habitat for Humanity in Brainerd.  He has one daughter and lives with his wife in Baxter.  218-851-8054.
Pat Wing - Quartermaster   Patricia I. Wing (Mogensen) was born in Brainerd, MN, on April 20, 1953. She graduated from Brainerd High School in 1971 and joined the U.S. Army in October of 1974.

Pat's story:  I took basic at Fort Jackson, South Carolina, then Advanced Individual Training at Fort Gordon, Georgia, as 95B20 (Military Police).  After training, I was sent to Fort Lewis, Washington.  From there I went to Pusan, Korea, which gave me the eligibility to join the VFW.  After Korea I was sent to Fort Monmouth, New Jersey and was discharged in the fall of 1977.

I came home to Brainerd and in January of 1978, and married Dale Wing.  We dairy farmed until 2014.  I had a full time job with Chas Levy services for 33 years.  When they moved to Chicago, I started a different career at Mills Fleet Farm in 2007.  We have 2 sons (Travis & Justin) and a daughter-in-law Becky, with a lovely granddaughter named Zorey.

I’ve enjoyed my membership very much and presently serve as the Post 1647 Quartermaster, along with being a club part-time bartender.
Michael "Doc" Williams - Sergeant at Arms.  Born October 31, 1950, Mike enlisted in the U.S. Navy in July 1969.  His naval occupational specialty was corpsman.  Mike spent one year aboard the U.S.S. Hancock attack aircraft carrier, CVA-19, in the Tonkin Gulf, on the South China Sea at Viet Nam from 1972 to 1973. He was honorably discharged in 1973. Then it was into the Army for a total of 22 years of service to our country.

Mike's story:  I am glad to have the opportunity to serve in the Veterans of Foreign Wars at Post 1647.  One of my duties is to be a part of the Honor Guard​ with a bunch of great men and women vets.  Mike's Mail Call poem 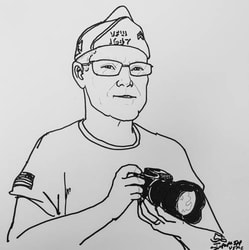 ​​Mark Persons - Chaplain, Photographer and Webmaster:  Mark Persons was baptized as a Presbyterian.  Later he became a Baptist and finally a member of the Park United Methodist Church in Brainerd.  Mark brings the word of God to all faiths at Post 1647.  Some have taken to calling him Father Mulcahy, as in M*A*S*H 4077.

Mark's Story:  I joined the U.S. Army in 1966.  Basic training was at Fort Polk, Louisiana.  It was later renamed Fort Johnson.   I taught electronics at Fort Monmouth, NJ.  Then it was off to Vietnam to be Sergeant in Charge of an avionics repair shop in support of the high-tech OV-1 Mohawk​ Surveillance Aircraft.  Back in civilian life in 1969, I worked as a radio broadcast engineer until retirement in 2018.  Brainerd Dispatch Memorial Day story.  Paula and I shop local and buy American, especially when it comes to cars.  The money stays here to help Americans.  We are happy to be participating members of VFW Post 1647.
Steve Rosenow - Brainerd VFW Service Officer.  Steve keeps the membership updated on laws and benefits affecting veterans.  Steve received a purple heart in Vietnam and went on to be a veteran service officer in the southern part of the state before coming to Brainerd in 1986 to be the Crow Wing County Veteran Service Officer until 2000.  Steve is also a member of the DAV and the Color Guard/Honor Guard.  ​
Tim Brastrup - Trustee
Tim was in the U.S. Army Artillery 1970 to 1973, achieving the rank of Sergeant E5.  A Vietnam-era veteran, he served in Germany.  Tim transferred his VFW membership from the Jenkins post to Brainerd in March 2019.   In civilian life, he worked as a fisheries manager for the Minnesota Department of Natural Resources until his retirement.  Tim and his wife Kathy live in Baxter.  He is often a part of the Brainerd Honor Guard at veteran funerals and civic events.  Kathy is a member of the Brainerd VFW Auxiliary.
​Don Lohse - Trustee
Don joined the Brainerd VFW on June 13, 2021, transferring from Jenkins where he was the Commander from March 2019 to June 2021. He served in Vietnam on the USS Tulare, a navy cargo ship, from 1971 to 1975. Don was deployed to Vietnam in September of 1972 thru May of 1973, operating on the inland waterways of Southeast Asia. From April – November 1974 his ship made second cruise to Vietnam. John received two Vietnam Service Ribbons.  He resides in Backus and is currently the Jr. Vice Commander of the MN VFW Sixth District.  The Pine and Lakes Echo Journal wrote a story about Don's life and community service.
David "Dave" Meyer - Past Commander and past Senior Vice Commander.  Dave coordinates the Honor Guard/Color Guard and continues to advise new officers.  Contact him at 218-829-0608.
​
Dave graduated from the Brainerd High School in 1967 and went into the Army in 1967 with a Military Occupational Specialty of 11B4P [Light Weapons Infantry].  He served in Vietnam 1968-69 as a sergeant E5 with 2/17 Cavalry, 101st Airborne.  On return to the United States, Dave was assigned to Co. B [Ranger] 75th Infantry.  In civilian life, he was a UPS driver until his retirement.  Dave became active with the Brainerd VFW in 2005 and served as Brainerd VFW post commander 2008 - 2009, then as Senior Vice Commander until 2022.   Community Member of the Month.

Dave's story:  I graduated from Central Lakes College in 1972, then worked for UPS [United Parcel Service] for 30+ years.  I am a member of the VFW, the Disabled American Veterans and the Vietnam Veterans of America.
Apply for Membership.  Annual dues are $35, but a life membership us a better choice.  Meetings are the second Tuesday of every month.  Come for a Taco dinner starting at 5 pm, then stay for the meeting at 7 pm.