BRAINERD VFW
People you might meet at VFW Post 1647 in Brainerd, Minnesota, USA
March 30, 2021:  William "Bill" Swenson and family showed up for tacos one evening.  You'll notice he is wearing a Navy Dad shirt.  Daughter Madison is not here because she is an E3 in the U.S. Navy, with the plan to serve aboard a submarine and see the world. 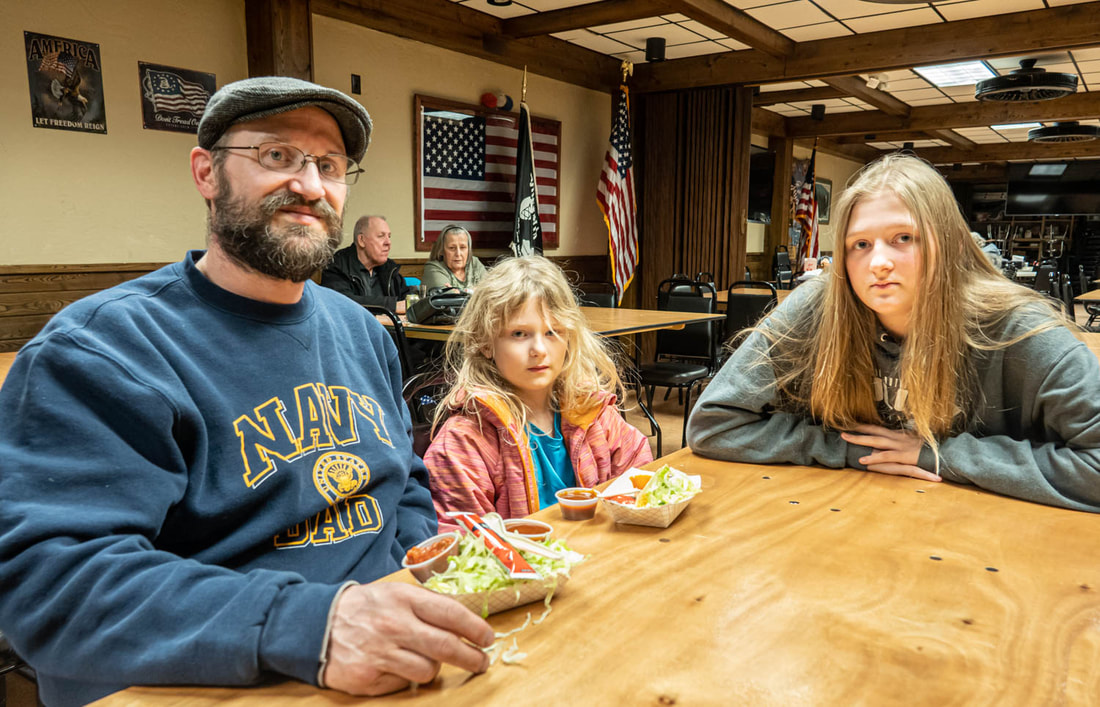 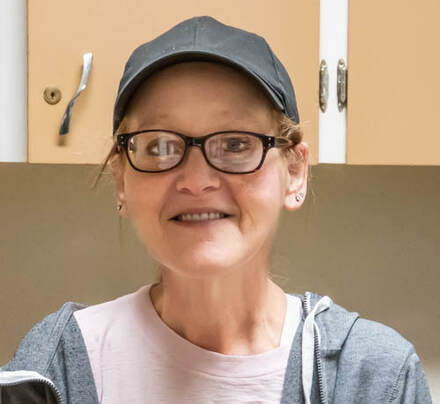 March 17, 2021.  You'll find Kris Anderson volunteering in the kitchen making tacos on Tuesday and wings on Wednesdays.  Her mother Linda is a member of the Brainerd VFW Auxiliary.  Kris lives in Brainerd and likes to help others.  Thanks Kris!
​March 12, 2021:  Casey Hanson is seen here tending bar with a mask during COVID.  You've seen him, in the past, on Thursday nights calling patrons to pick up their food orders.  Casey is the son of Brainerd VFW Gambling Manager Chuck Hanson.
Shawn Miller is one of the bartenders at the Brainerd VFW.  Shawn's grandfather Raymond Windorski was a U.S. Army infantryman, training in Alaska and then fighting in Italy during WWII.  He received a bronze star and purple heart during the conflict.  Shawn's mother is Pam Miller, a member of the Brainerd VFW Auxiliary.  The second photo is Shawn with his face shield during COVID times.
December 10, 2019:  A big welcome to Chief Warrant Officer Kevin Jensen, a new life member at the Brainerd VFW.  He is a 32 year veteran of the Minnesota National Guard with 18 years active duty including serving in Kuwait, Operations Enduring Freedom and Iraqi Freedom.  Kevin lives in Baxter and is working at Camp Ripley in vehicle maintenance.  Kevin is also seen in the Brainerd Honor Guard/Color Guard at funerals and parades.  He also handles youth baseball for the Brainerd VFW.
VFW life member Yvette Stoliker joined the Brainerd VFW in 2016.  She retired from the U. S, Air Force in 2011, after 20 years of service, including a year in Korea 2003-2004.  As a Master Sergeant, her specialty was radiation health.  Her service photo from years ago is on the right.  Yvette studied for and received an MBA in business management.  She enjoys being a part of the community and likes the military connection at the Brainerd VFW.  Like many younger members, Yvette reads the monthly Vet’s Gazette post newsletter online at the Brainerd VFW website.  That saves printing and postage costs.
July 6, 2019: Mary Lehinger is seen here being welcomed to the Brainerd VFW by Commander Chip Borle.  She came from a military family.  One grandfather served in WWII and Korea.  Another grandfather was in Korea.  Her father is a Vietnam veteran.    Mary took her basic training at Fort Polk, LA, and spent two years in the National Guard, then two years in the U.S. Army, serving in Somalia 1993-94.  Her specialty was communications and transportation.  Mary transferred to the Brainerd VFW from Hinckley, MN in June 2019.  She is a 6 foot -2 inch member of the Brainerd Honor Guard, a member of the Brainerd American Legion, life member of the DAV, and a life member of the Brainerd VFW.
Matt Gilgenbach grew up on a farm near Wahpeton, North Dakota.  He joined the U.S. Army in 1952 and served until 1955.  Matt was with the 4th Field Artillery Battalion at Camp Ripley.  He remembers transporting 75 mm artillery shells on pack mules at Fort Leavenworth, Kansas, something a farm boy would know how to do.  Matt served with the Big Red One in Japan, Korea, and Okinawa.  He was a Corporal and a squad leader.  Back in civilian life, Matt was a plumber and construction foreman until his retirement.  He now lives in Brainerd.   Matt is shown here in his Honor Guard uniform on Veterans Day in 2015 with his sister Rose Robinson at Riverside Elementary School where ceremonies were held.  Rose is a member of the VFW Auxiliary.
April 14, 2019:  Jason "JT" Turner is one of the bartenders.  A friendly guy, he is not a veteran, but his grandfather, William "Ben" Foster, was a WWII veteran.   Say hi to JT when you come in.  Bartenders and cooks are volunteers, so please tip them to say thanks. 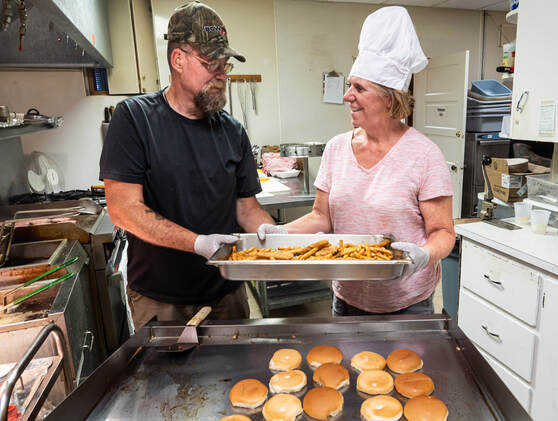 August 8, 2019:  Joe and Sharon Adams of Brainerd show up occasionally to do cooking.   Joe is a member of the Brainerd American Legion.  He and Sharon are glad to help at the VFW....especially on Thursdays when it is "Burger Night."  Many thanks!
March 16, 2019:  Randy Lane of Brainerd was Post Commander 1998-99.  He is a veteran of the first Gulf War and is often seen in the Brainerd Honor Guard.
January 2, 2019:  Bob Marsh is a long-time life member of the Brainerd VFW.  He served as an infantryman in the U.S. Army 1949-1950 and then was recalled to fight in the Korean conflict 1951 to 1952.  In civilian life, Bob worked in construction and as a truck driver.  He served as Brainerd VFW post commander in 1989.  Bob was youth chairman for many years, including putting on state VFW baseball tournaments in Brainerd.  His daughter, Dawn Garin, is editor of the Brainerd VFW's Vet's Gazette newsletter, among other duties.
Marty Judd was an infantryman in the U.S. Army 1968 to 1970.  He received a Purple Heart while serving in Vietnam.  Marty has been in Brainerd Honor Guard for many years.  You also see him playing taps on a bugle at many ceremonies.  He drives a mid-1950s U.S. Army Jeep around town in the summer and at parades.