Things to Think About

America, one people united with a national spirit
A GI Christmas Poem
Mail Call Poem by Mike Williams
Signers of the Declaration of Independence
​In Water's Deep poem
VFW - Those who fought together, belong together.

America was established to discover and maintain liberty among men.

Servicemen and women put their lives on the line for the defense of our democracy so that freedom might live.

If there must be war, let it be in my day so my children may have peace.

"A nation which forgets its defenders will itself be forgotten."  Calvin Coolidge, 30th President of the United States

"Bravery is determination to do a job that you know has to be done."  Audie Murphy, Medal of Honor recipient in WWII

"True courage is being afraid, then going ahead and doing your job."  General Norman Schwarzkopf

We had life-threatening experiences years ago in the service and now we have COVID!
COVID is not fair, but we'll get through it.

We don't know them all, but we do owe them all.

Patriotism consists not in waving the flag, but in striving that our country shall be righteous as well as strong.  James Bryce.

Never in the field of human conflict was so much owed by so many to so few.  Winston Churchill, British Prime Minister in WWII

A man's country is not a certain area of land, of mountains, rivers, and woods, but it is a principle and patriotism is loyalty to that principle.  George William Curtis

​The willingness of America's veterans to sacrifice for our country has earned them our lasting gratitude.  Jeff Miller

You can only protect your liberties in the world by protecting the other man's freedom.  You can only be free if I am free."  Clarence Darrow

It is well that war is so terrible, else we should grow too fond of it.  Author unknown

In war there is no substitute for victory.  General Douglas MacArthur

​JFK'S Secretary of State, Dean Rusk, was in France in the early 60's when French President Charles de Gaulle decided to pull out of NATO. Further, de Gaulle said he wanted all US military out of France as soon as possible. Rusk responded, "Does that include those who are buried here?"  de Gaulle did not respond. You could have heard a pin drop.

That from these honored dead we take increased devotion to that cause for which they gave the last full measure of devotion—that we here highly resolve that these dead shall not have died in vain—that this nation, under God, shall have a new birth of freedom—and that government of the people, by the people, for the people, shall not perish from the earth. -  President Abraham Lincoln

December 7, 1941:  Japan bombed Pearl Harbor.  A significant day for ALL Americans.  The U.S. Navy was dealt a tremendous blow, both in terms of ship destruction, and loss of life.  However, Japan did more than "poke the bear", they unknowingly sealed their own fate by unleashing the steel resolve that is inherent in most Americans.  And as history would dictate, we fought valiantly as one force!!!  God Bless the USA!!!

Our flag does not fly because of the wind.  It flies with the last breath of each soldier who died protecting it.

A Marine, speaking to his Navy father said, "Thanks dad for giving me a ride to the fight."

Our military doesn't ask why, instead it asks where and when.  Never take for granted what they have done for us.  Soldiers, Sailors, Airmen and Marines put our country ahead of themselves.

"You'll never really know what freedom is until you've lost it."  from an ex-POW

The great use of life is to spend it for something that will outlast it.  William James, Father of American Philosophy

We pause to give thanks on Memorial Day to the people who fought and died for the things we have.

In war, there are no un-wounded soldiers!

The soldier may leave the war, but the war never leaves the soldier.

Robert Whiting, an elderly gentleman of 83, arrived in Paris by plane. At French customs, he took a few minutes to locate his passport in his carry on. "You have been to France before, monsieur?" the customs officer asked\ sarcastically. Mr. Whiting admitted that he had been to France previously. "Then you should know enough to have your passport ready." The American said, "The last time I was here, I didn't have to show it."  "Impossible. Americans always have to show their passports on arrival in France!" The American senior gave the Frenchman a long hard look. Then he quietly explained, ''Well, when I came ashore at Omaha Beach on D-Day in 1944 to help liberate this country, I couldn't find a single Frenchmen to show a passport to."  You could have heard a pin drop.

Whether in times of war or peace, veterans and their families devote their lives to the service of our country and the ideals we hold dear.  The sacrifices they make are without parallel.  In times of war, veterans put their lives on the line to protect our freedoms.

The legend of heroes is the memory of a great name and the inheritance of a great example.  Benjamin Distaeli, two times British prime minister in the 1800s.

A hero is someone who has given his life for something bigger than himself or herself.

Some live an entire lifetime and wonder if they ever made a difference in this world.  A veteran doesn't have that problem.
Ronald Reagan, U.S. President 1981-1989.

I am a veteran.  My oath of enlistment has no expiration.

Courage is doing the right thing, rather than taking the easy way out.

We stand for the flag and kneel for the fallen.

About the United States:  "No country has shed more of its own blood for the freedom of other people than America."  Page 297 in the book Fearless by Eric Blehm.

We should all feel more strongly about our country than we do about our favorite baseball or football team.  After all, we are blessed in America to have those things, only as long as it remains the land of the free.  Mark Persons.

"We identify the flag with almost everything we hold dear on earth, peace, security, liberty, our family, our friends, our home.  But when we look at our flag and behold it emblazoned with all our rights, we must remember that it is equally a symbol of our duties.  Every glory that we associate with it is the result of duty alone."  Calvin Coolidge, 1872-1933, 30th U.S. President 1923-1929.

"This nation will remain the land of the free only so long as it is the home of the brave."  Elmer Davis 1890-1958, news reporter.

A Veteran is someone, who at one point in his or her life, wrote a blank check payable to the United States of America for an amount up to and including life. That is beyond honor and there are way too many people in this country who no longer remember that fact.

The best things in life aren't things.  A friend is someone you can count on....and can count on you.

Freedom--no word was ever spoken that has held out greater hope, demanded greater sacrifice, needed more to be nurtured, blessed more the giver, or come closer to being God's will on earth.  Omar N. Bradley, 1893-1981, U.S. Army General WWII.

There was a conference in France with a number of international engineers, including French and American.  During a break, one of the French engineers came back into the room shouting, "Have you heard the latest dumb stunt Bush has done?"  He has sent an aircraft carrier to Indonesia to help the tsunami victims.  What does he intended to do, bomb them?"  A Boeing engineer stood up and replied quietly, "Each of our carriers has three hospitals that can treat several hundred people; they are nuclear powered and can supply emergency electrical power to shore facilities; they have three cafeterias with the capacity to feed 3,000 people three meals a day, they can produce several thousand gallons of fresh water from sea water each day, and they carry half a  dozen helicopters for use in transporting injured to and from their flight deck..  We have eleven such ships; how many does France have?"  There was dead silence.  Author unknown.

A veteran is someone who struggles up from a wheelchair to stand and proudly salute the American Flag when it is presented or is passing by on parade.

A U.S.  Navy Admiral was attending a naval conference that included Admirals from the U.S., English, Canadian, Australian and French Navies.  At a cocktail reception, he found himself standing with a large group of officers.  Everyone was chatting away in English as they sipped their drinks.  A French admiral suddenly complained that, 'whereas Europeans learn many languages, Americans learn only English.' He then asked, 'Why is it that we always have to speak English in these conferences rather than speaking French?'  Without hesitating, the American Admiral replied, "Maybe it s because the Brits, Canadians, Aussies and Americans arranged it so you wouldn't have to speak German."  You could have heard a pin drop!  Author unknown.

"Experience is a hard teacher because she gives the test first and the lesson afterward"  Vernon Law, baseball player with Cy Young award 1950-1967.

When in England at a fairly large conference, Retired U.S. General Colin Powell was asked by the Archbishop of Canterbury if the U.S. plans for Iraq were just an example of empire building by U.S. President George Bush.  General Powell answered by saying, "Over the years, the United States has sent many of its fine young men and women into great peril to fight for freedom beyond its borders. The only amount of land we have ever asked for in return is enough to bury those who did not return."  It became very quiet in the room.

A veteran is someone who puts God and country ahead of himself.  Mark Persons.

There are no secrets to success.  It is the result of preparation, hard work, and learning from failure.  Colin Powell, American Statesman and retired U.S. Army General.

My time in uniform is over, but service to my country never ends.

Believe in who you are, use wisely what you have, and each day will bring you a smile.

No one stands taller than one who is willing to stand corrected.

The price of freedom is eternal vigilance.  President Thomas Jefferson 1743 - 1809.

Patriotism is not a short and frenzied outburst of emotion but the tranquil and steady dedication of a lifetime."  Adlai E. Stevenson Jr., 1900-1965, U.S. Diplomat. 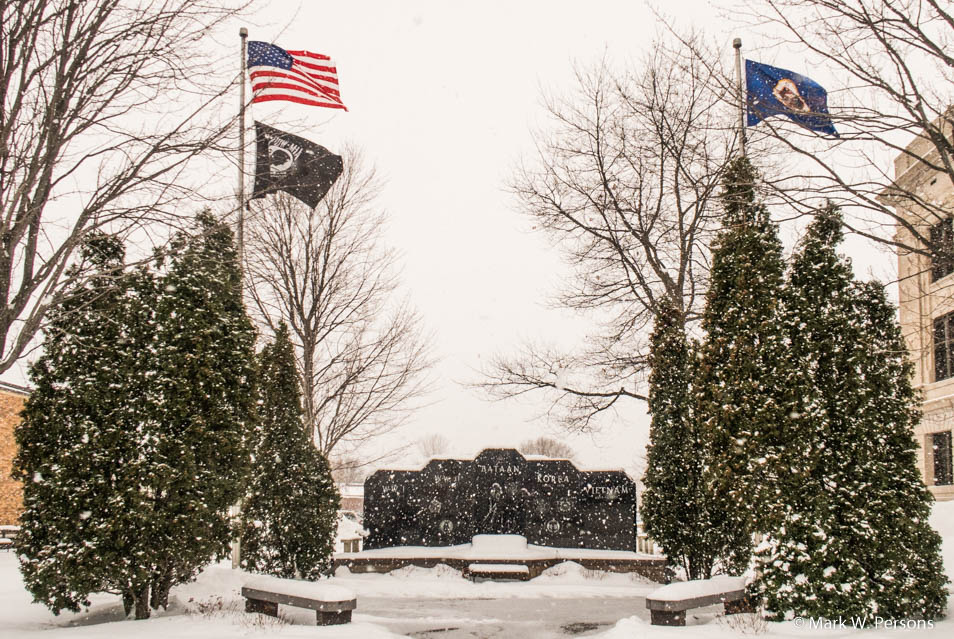 Snow falling on a winter day at the All Veterans Memorial, 4th and Laurel Streets in Brainerd, Minnesota.